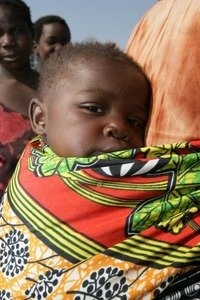 The territory of the country was inhabited even in pre-historical times, which can be scientifically confirmed by archaeological finds discovered in Lunda, the Congo and Namib Desert. The first people who appeared here were bushmen, skillful pygmy hunters with light-brown skin. Early in the 6th century B. C. some peoples that had reached a higher stage in their development and were using technological achievements of the Iron Age, started one of the greatest migrations in human history. They were Bantu people from the north, probably from the area that is now called The Republic of Cameroon. When the Bantu reached Angola, they met the bushmen, and other ethnic groups that were even more primitive, and acquainted them with the Bantu technologies in the field of metallurgy, production of ceramics and agriculture.
Historically, the first sociopolitical entity that appeared on this territory came to be known as The Congo Kingdom. It was formed in the 13th century and extended from Gabon in the north to the Cuanza River in the south; from the Atlantic Ocean in the west to the Cuango River in the east. The basis of the country's economy was formed by its agriculture. The power was in the hands of the local aristocrats – mani – who occupied the key administrative posts and were subordinate only to the king of the Congo. The Kingdom was subdivided into territorial units called m’banza, and each such unit was controlled by a mani. The capital city was M’banza Congo, with a population of over 50 thousand people.

In the 16th century the Congo Kingdom consisted of six provinces. It also included a number of other kingdoms formed on a tribal basis, and among these was the Ndongo Kingdom in its southern part. The main line of activities of the Congo Kingdom was trade based on highly developed agriculture and intensive mining for extracting natural resources. In 1482 Portuguese caravels commanded by Diogo Cao reached the estuary of the Congo River, named also Nzadi.
The Portuguese had firearms and they confessed in a religion that was attractive for the natives; on the other hand, the Congo Kingdom could offer Portugal some slaves, ivory and mineral resources.
The Portuguese colony named Angola was established in 1575 upon arrival of Paulo Dias de Novais accompanied by 100 settler families and 400 soldiers. Luanda became a town in 1605. The country traded with Brazil. The situation was paradoxical - while being officially a Portuguese colony, Angola was virtually a Brazilian colony.
In the south of the Congo Kingdom, in the basin of the Cuanza River, there were a number of powerful states. The main of these states was the Ndongo Kingdom ruled by the king Ngola. Ngola Kiluange was reigning when the first Portuguese landed on the coast of the country. The king pursued a policy of alliance with the neighboring states. Several years after his reign Ndongo managed to revive due to the fact that the power in the country was taken by Ginga Mbandi, who came to be widely known in world history as Queen Ginga.

She pursued an ingenious policy and managed to contain the Portuguese through signing with them a number of aptly worded agreements. In 1635 she established a powerful coalition together with such states as Matamba, Ndongo, Congo, Kassanje, Dembos and Kissamas. While leading that strong coalition, Ginga threw back the Portuguese away from her lands.
In the meanwhile Portugal was occupied by Spain, and the Dutch used the situation to seize Luanda in 1641. But Ginga turned the Dutch into her allies, thus strengthening the coalition considerably and ousting the Portuguese forces back to their stronghold in Massangano, which the Portuguese were defending stubbornly and used the place as a base to periodically send out raid parties for conducting «Kuata-Kuata» warfare (for capturing slaves). Angolan slaves became the main factor of development of the Brazilian colony, because in spite of prohibition of slave trade, the Portuguese continued sending slaves secretly from Angola to Brazil.
In 1648, a strong naval squadron with many ships came from Brazil. That military expedition commanded by Salvador Correia de Sa i Benevides, seized Luanda again and ensured the start of massive returns of the Portuguese. Correia de Sa dealt a shattering and powerful blow at the forces of the natives. Since then the coalition started to decline. Ginga died in 1663. Two years later the king of the Congo made desperate attempts to retain his sovereignty over the lands around the bay of Luanda - Ilha de Luanda - occupied and defended by forces of Correia de Sa, but the king suffered a defeat, which later led to his kingdom's losing independence. The Ndongo Kingdom was taken over by the Portuguese Crown in 1771.
The old philosophy of war gave gradually way to the new philosophy of trade. The tremendous upgrowth of commerce and availability of appropriate agreements contributed to such changes in relations between the parties. The former militant and conflicting countries began turning into states oriented towards production and exchange of goods.
Beginning from 1764, the former slaveholding society started turning into a nation that was oriented towards producing consumer goods. In 1850 Luanda was already a big city with numerous commercial firms. Together with Benguela it exported palm oil and peanuts, wax, copal (tree resin), wood, ivory, cotton, coffee, cocoa beans and other foodstuffs. Here the local people started to produce maize, tobacco, dried meat and cassava flour.
Angolan bourgeoisie began to appear and develop. In 1836 slave trade was abolished, and in 1844 Angolan ports were opened for visits by foreign sea vessels.
In the area of the central plateau (Planalto) there appeared the states Bie and Bailundo, and the latter became widely known as a big producer of foodstuffs and wood resin.
The constantly strengthening colonial authorities that were becoming richer and richer, could not put up with the successful development of these states and established a complete control over these territories by the beginning of the 20th century.
After the Berlin Conference, Portugal had to start the territorial development of its colonies immediately.
The trade in wood resin and ivory, together with taxes collected from the local population, enriched the parent country – Portugal – to a great extent.